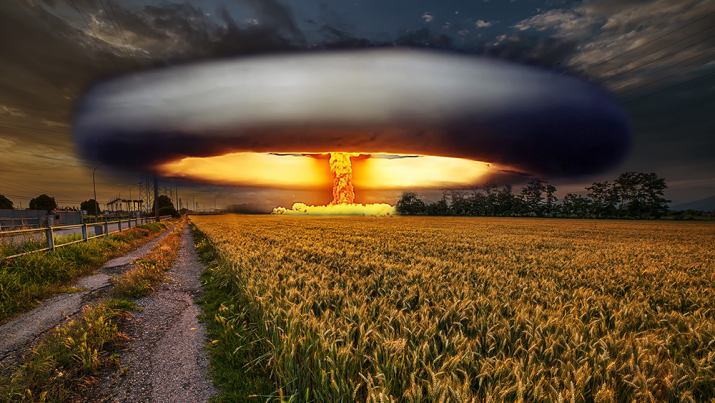 As you’re probably aware by now, the government of Hawaii texted out an emergency ballistic missile warning over the weekend, terrifying its citizens with the following text:

EMERGENCY ALERT: BALLISTIC MISSILE THREAT INBOUND TO HAWAII. SEEK IMMEDIATE SHELTER. THIS IS NOT A DRILL.

It actually was a drill, it turns out, but in the 38 minutes after this text was sent out, Hawaiians panicked in the streets, crying and screaming for dear life, according to multiple media reports. Via NBC News:

The aftermath of the false alert was “crazy,” she told NBC Bay Area, and prompted people to run around on the streets “crying and screaming,” wondering what to do. Andy Thammavongsa, who tweeted a screenshot of his phone that showed the time between each alert, lives in Ewa Beach and told NBC in a Twitter message, “Everyone was panicking, the whole island was awake and alert.”

Note to self: Don’t ever get caught in Hawaii during a nuclear attack. There’s no escape and the citizens panic. Oh, but on the not-so-bright side, some Hawaiians did start stuffing their children into storm drains.

Three crucial lessons in all this

There are three crucial lessons you need to learn from this false alarm episode:

#1) The government is beyond incompetent.

The entire system for sending out terrifying alerts to the population is controlled, apparently, by one extremely incompetent person who has absolute authority over sending these alerts, with no oversight whatsoever. At the same time the media is totally freaking out over President Trump’s “big button” on his desk, it turns out some moron in Hawaii’s emergency management hierarchy actually does have a button on his desk, and he pushed it to see if it actually did work. Guess what? The button works.

That’s the official explanation, at least. I strongly suspect the more realistic explanation is that the Hawaii government’s emergency alert system was hacked, just like the Atlanta airport’s power grid was recently hacked and brought to its knees a few weeks ago.

By the way, did you ever wonder why the government was drilling a scenario that involves a nuclear missile striking Hawaii? The answer should be obvious. It’s because the government expects that possibility to occur. Hawaii, after all, is a fairly easy target for North Korea’s ICBMs. So is Guam or Seattle, for that matter. The very fact that Hawaii was drilling for this is an indication that a real risks exists for this possibility to occur.

The second big lesson here is that almost nobody in general society is actually prepared for a nuclear strike (or any emergency, for that matter). Far from the organized, cool-headed response we’re always told will happen by “prepper skeptics” who think preparedness is rooted in paranoia, this episode proved, beyond any shadow of a doubt, that people go insane when it’s all about to hit the fan.

There’s a huge lesson in this, and I’ve repeated it many times over the years: The greatest danger in any emergency is unprepared people (who lose their minds a panic). Hawaii just proved that yet again. If anything, this fake ballistic missile alert was a very strong reminder to all preparedness-minded people that you’d better have a bugout plan to get away from the unprepared masses who panic. Or, if you prefer, you could stuff your children into a storm drain and see what happens. It’s not the worst idea ever if you’re totally unprepared and have no other options.

#3) Time to assess your own situation: What would YOU do if a North Korean nuke were just minutes away?

This accidental alert also served another purpose: It reminds us all to take a serious look at our own preparedness status. How ready are you for a nuclear attack on your city? Do you even know what to do in the immediate aftermath of an attack? The CDC recently tried to educate people about nuclear attack defenses, but this is the same corrupt deep state agency that can’t even prevent people from catching the flu:

Assess your supplies BEFORE the missiles are in the air

Right now is the time to take a whole new look at your preparedness supplies, including storable food and dietary iodine, which can help protect your thyroid from iodine-131 radiation exposure. You might also be wise to consider your communications capabilities (do you have a human-powered radio with a dynamo generator handle?) and self-defense capabilities (when was the last time you shot that Glock hiding on the top shelf in your closet?).

Do you have an effective face mask with fresh filters so that you might avoid inhaling radioactive particles? Do you have plastic sheeting to seal off your house from the radioactive dust floating around? Do you know the half life of Iodine-131 vs. Cesium-137?

To nearly all Americans, the answer from most people is, “Huh?” If your answer is “Huh?” then you’re woefully unprepared for the reality of a ballistic missile strike — a possibility that seems more and more likely each day, thanks to North Korea’s total insanity. (President Trump: Please eliminate the deranged Kim Jong-Un regime as quickly as possible; it’s a necessary step to protect America’s cities from nuclear attack.)

Here are a few websites and resources that can help you get prepared:

Read Nuclear.news and Radiation.news for coverage of nuclear war, the science of radiation, self-defense against radioisotopes and more. These are updated every few days with more posts. SurvivalBlog.com is also an excellent resource for daily survival wisdom, and we publish Bugout.news for even more coverage of bugout tactics and strategies that can save your life.

We also offer the Health Ranger’s Nascent Iodine as a lab-verified dietary supplement to increase your iodine intake. To boost your stored food using lab-verified organic foods and superfoods, pick up one of the Health Ranger organic survival food buckets, which are back in stock for the moment (but seem to sell out every few weeks, as these surges in demand occur). Sadly, shipping these heavy buckets to Hawaii will cost you, but if you live in Hawaii, you’re probably already used to that.

Will the people who mock preppers ever wise up and stop being total pricks?

By the way, I have to wonder how many of the people in Hawaii who were running around panicking and screaming were also the very same people who typically attack preppers and call them paranoid. For 38 minutes, those individuals suddenly realized how incredibly unprepared they were, and they freaked out, believing they were about to die.

Sadly, that is the default position for nearly all people who refuse to prepare. They routinely mock preppers and survivalists, utterly failing to realize that preparedness is the only real way to survive a nuclear attack. Perhaps this little scare in Hawaii has a few people rethinking their own lack of wisdom. I’m willing to bet that all sorts of people suddenly wished they had been paying attention to survival know-how websites instead of reading TMZ.

Because one day, that ballistic missile alert you receive on your mobile phone won’t be an error. And you will have to try to survive with whatever tools and skills you already possess. UPS doesn’t deliver in radiation zones, for some reason. Prepare accordingly.