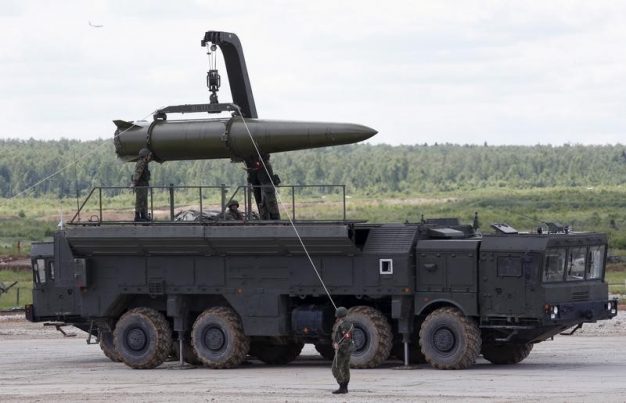 Contrary to what some on the left and many on the right often argue, Russia is not an ally of the United States and Vladimir Putin is not a friend. Rather, Russia is an incredibly strong nation that is seeking to acquire more power and more territory by way of force, and they don’t intend on letting anything – including the United States – stand in their way. As such, Russia should be treated as an enemy, not as an ally like so many Republicans today insist upon. The sooner our country comes to terms with the fact that Vladimir Putin would stab us in the back if he was ever given the opportunity, the better.

In a recent article, B. Rose Kelly of the Woodrow Wilson School of Public and International Affairs described at length the threat posed by Russia, and more specifically, their stockpiles of highly enriched uranium. Kelly sited a report put together by the International Panel on Fissile Materials (IPFM), which found that Russia currently holds the world’s largest stockpile of highly enriched uranium. (Related: Paul Craig Roberts says that Russia is currently preparing for a pre-emptive nuclear strike on America.)

The IPFM, which consists of nuclear experts from 16 different countries, explained that Russia’s uranium stockpile is an estimated 680 tons, with 8.5 tons being used annually as of 2017. Additionally, the Russians operate more enriched uranium facilities than the rest of the world combined, which, needless to say, poses a serious security risk to the United States and other countries around the world. (Related: Russia has launched a secret military satellite into orbit from its new Arctic base of operations.)

“There has been a great deal of progress in reducing the number of locations where highly enriched uranium can be found outside of Russia,” explained Frank N. von Hippel, founding co-chair of the International Panel on Fissile Materials, senior research physicist, and professor at Princeton University’s Woodrow Wilson of School of Public and International affairs. “As a result,” he continued, “Russia has become an increasingly important part of the remaining problem.”

One possible solution to this problem was offered by a man named Pavel Podvig, a researcher at Princeton’s Program on Science and Global Security and editor of the IPFM report. “Russia’s participation is essential for the success of the global effort to reduce the risks associated with highly enriched uranium use,” he explained. “Russia has the ability to make a strong contribution to the international highly enriched uranium minimization effort. This would require launching a new round of international cooperation that would involve Russia’s technical community developing a new strategy for reducing the use of highly enriched uranium.”

But until this world without the excessive usage of highly enriched uranium is created, the United States must accept the fact that Russia is armed and dangerous. The absolute worst thing America could do right now in terms of foreign policy and national defense is the very thing that Barack Obama pushed for throughout his entire time in office – that is, the process of reducing America’s nuclear stockpile. We must be prepared for the worst, especially as Russia continues to make threats against our country.

Just a few days ago, for example, Russia threatened direct confrontation with U.S. forces in Syria in areas that are currently occupied by American units if its troops came under fire. The warning comes as tensions between the U.S. and its allies and Russia and its allies continue to escalate in the Syrian Desert.

Of course, this warning is much less significant than it would have been had Russia threatened to launch a nuclear missile at the United States, but even so, it is a sign of rising tension that will inevitably get worse before it gets better. In the meantime, America must remain vigilant and prepared to defend itself should it become necessary.