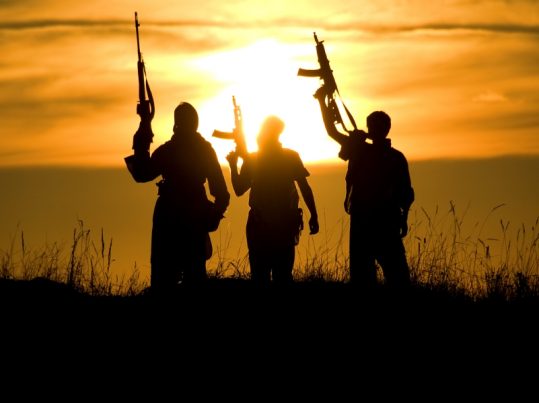 ISIS is using human guinea pigs to test toxic chemical weapons for later deployment against the West, the British news media is reporting. Iraqi special forces reportedly found evidence of chemical experiments on prisoners in papers hidden at Mosul University. The Iraq military recently regained most of that city back from the terrorist army.

The documents show that one prisoner was force-fed thallium sulfate, described as a commercially available salt that is colorless, tasteless, and dissolves easily in water. The prisoner apparently writhed in pain for 10 days with fever, nausea, and a swollen stomach and brain, before he finally succumbed to the poison. Another prisoner died a few hours after being injected with a nicotine-based compound.

According to the Independent of London, U.S. and British security agencies which have validated the documents worry that the ISIS intends to use this poison on the free world through chemical warfare:

The extremist group has reportedly poisoned prisoners by spiking their food and water with compounds used in pesticides that are easy to obtain. Security forces now fear the terror network may hatch a twisted plot to contaminate Western food supplies with formulas that quickly dissolve in liquid.

Describing it as a “horrifying throwback,” a U.K. chemical weapons expert compared this disturbing development to how the Nazis tested deadly mustard gas on concentration camp prisoners during World War 2.

ISIS has recently deployed chlorine gas against Iraqi troops as well as using mustard gas in Syria, The Times of London noted, adding that authorities believe the jihadists have recruited chemical weapons experts both from around the world and from the regime of former dictator Saddam Hussein. (RELATED: Read more about ISIS at Terrorism.news.)

Against the backdrop of a potential chemical attack or another form of terrorism, the open-borders-obsessed establishment on both sides of the Atlantic continue to allow ISIS terrorists to easily walk into Europe and the U.S. as Natural News founder Mike Adams warned late last year. This is a function of politicians harboring a delusional sense of political correctness that puts public safety at the bottom of the priority list. Moreover, U.S. federal judges living in a theoretical world keep thwarting President Trump’s reasonable efforts to impose a temporary travel ban on a just a handful of failed states.

Although the scenario is different, and there may be no direct parallel, Natural News readers may recall that pharmaceutical giant Pfizer some years ago agreed to pay $75 million to settle a class-action lawsuit from Nigerian parents. The plaintiffs claimed that the company harmed their children by using them as guinea pigs in a nonconsensual, unlicensed drug trial. Eleven of the 200 children in the study died, and parents claim that others suffered from brain damage, organ failure, and other severe side effects.

Who is going to be held responsible when a terrorist attack of this nature occurs on our shores?